The tournament that every darts player that has ever picked up an arrow wants to win is the PDC World Championship. Held over the Christmas period at Alexandra Palace, this is where darting legends are made. It is the primary darts betting event of the year and on this page, we will point you in the direction of the best UK PDC World Championship betting sites.

As we outlined in our introduction, a number of factors determine what makes a top UK PDC World Championship betting sites. William Hill sponsors the tournament so it is hardly shocking that they are the top bookie for betting on the PDC World Championship. Paddy Power and Betfred weren’t far behind them though…

Paddy Power is another bookmaker with a reputation for running some seriously good PDC World Darts Championship promotions. Their sign up offer for the 2018/19 edition was a very good one(especially in hindsight!). They offered a massive enhancement on the Green Machine MVG to win the tournament outright for new customers. Instead of 11/10, if you signed up with Paddy Power they were offering a monstrous 7/1! 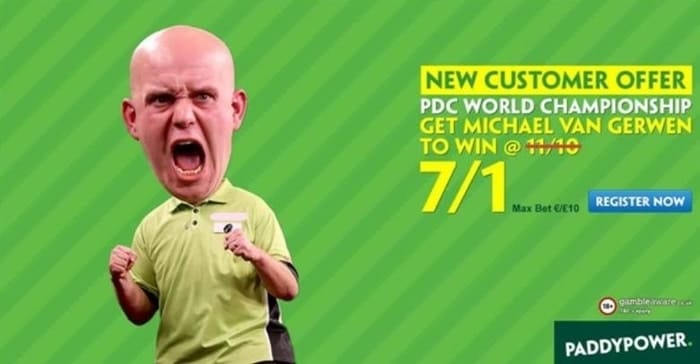 Unlike a lot of sign up offers from other betting sites, the maximum stake for this promotion was a healthy £10. Punters who availed of this offer were happy they did, netting a £70 windfall as Van Gerwen ended up winning at a canter. Money-back specials are another common occurrence when you sign up with Paddy Power, not just for the PDC World Darts Championship, but also for many other major darts and sporting events.

Football and darts dominate the British and Irish sporting calendar during the festive period. PDC World Darts Championship free bets and promotions are usually widely available, both before the tournament and after it starts. You will usually see a variety of PDC World Darts Championship promotions for both new and existing customers. If you want to know what to watch out for, we look at some of the more common specials below …

MVG is a short price to retain his PDC World Championship crown in 2019/20. The Dutch dartist is at home on the big stage and he is hitting form at the right time. He landed the first big event of the year in Dublin and he did it easily. Van Gerwen is 11/8 to repeat his 2018/19 heroics and if he is at his best, he will be difficult to dethrone. However, there are quite a few young pretenders snapping at his heels and at 33/1, ‘The Asp’ Nathan Aspinall looks overpriced.

Aspinall won the 2019 UK Open and he did it in style, taking out the ‘Big Fish’ finish of 170 to beat Rob Cross. That showed he has the temperament to produce on the big stage and the 28-year-old is now firmly established in the top 16. He reached the semi-finals of this tournament last year and that experience should stand to him. 33/1 looks massive and Nathan Aspinall is our each-way tip for the 2019/20 PDC World Championship.

The PDC World Championship is a high-pressure event and only the mentally strongest can handle the heat. Although inexperienced players can sometimes make an impact, more often than not the seasoned warriors come to the fore. However, the experienced players are far from invincible and in the early rounds upsets often happen. If you can spot when the surprise results are most likely to happen, you will be rewarded with generous odds. Check out our tips on how to turn a profit from betting on the PDC World Championship in the next section…

This is a market that most darts punters will be very familiar with. The outright winner market requires you to predict who will win the PDC World Championship. Each way betting is available on this market too, with most betting sites offering terms of 1/2 odds for 1-2 places.

That means that if you bet on a player each way they need to reach the final for you to get a return. For example, if you have £10 e/w our 33/1 each way selection Nathan Aspinall and he loses in the final, you’ll get paid on the place part of your bet (£10 @ 16.5/1).

This is another market that is simple to understand. You bet on either player to win the match and the player you back must win for you to land your wager. Most punters prefer to combine match bets in accas and if that is your thing, make sure to take full advantage of every Acca Boost and Acca Insurance offers that you can.

However, if you are serious about making a steady profit from match betting on the PDC World Championship we recommend sticking to single bets. The more legs you include in an acca, the higher the probability is that one leg (or more) will let you down. Single bets are reliant on just one result and player, so winning is a much more realistic possibility.

Handicap markets are also very popular with PDC World Darts Championship punters. Handicap betting gives one player a head start and in order to win, the player you back must cover the spread. This type of betting is most useful when a highly ranked player is up against an unseeded player.

For example, MVG will be an extremely short price for his first round PDC World Championship clash. If you want to get better odds, you can back him -1.5 or -2.5 sets. If you choose the former option, MVG needs to win 3-1 or 3-0 for you to collect. By backing MVG -2.5 sets, only a 3-0 win will do. The bigger the handicap is, the better the odds will be and the opposite applies when backing the underdog + 1.5 or +2.5.

If you are looking for a market with decent odds, placing a wager on the correct score is a viable option. In the early stages the odds for correct score betting aren’t great (best of 3 set format), but as the match lengths increase the odds do too. If you manage to predict the correct score in the final you will be richly rewarded.

Another very popular market with darts punters in the PDC World Championship is the Most 180s market. 180 is the maximum achievable score in darts at one visit. ‘Trebles for show and doubles for dough’ is a famous saying in darts. However, if you have a bet in the Most 180s market then lots of treble 20s for your selection will be beneficial.

If you have a bet in this market you will need your selection to score the most maximums, or 180s, in the match. It doesn’t matter if he loses, once they fill up the treble 20 bed more than their opponent does, you’ll collect. With some bookies like Paddy Power and William Hill, you can combine the Most 180s and Match Result markets.

The final PDC World Championship betting market we will look at is the ‘Highest Checkout’ market. Every leg in a darts match must be finished on a double and it is a huge thrill to see a player hitting a 3 dart finishing combination. The highest checkout available in darts is 170 and if the player you back in the Highest Checkout Market hits that, you’ll be quids in!

There are a few other markets you can bet on for the PDC World Championship. Some betting sites offer odds on whether there will be a 9 dart finish in each match and also during the tournament. Totals (Over/Under) betting is also available on the number of legs, 180s, and sets. PDC World Championship Accas are very popular too, which is no surprise with offers around like William Hill’s 3+Leg Acca Boost special.

Odds can change in an instant during PDC World Championship matches so make sure you find a bookie where you can place bets quickly with as few clicks as possible. Betfair and William Hill have solid desktop live betting suites, while on mobile Paddy Power and Unibet are up there with the best.

It is no secret that the next generation of punters are placing more bets on their mobile devices. They are the future, so it is hardly surprising that the vast majority of UK betting sites are focusing their attention on ensuring their customers can avail of high-quality mobile apps and web apps.

To be fair, most of our top PDC World Championship betting sites have adequate mobile betting options. The majority have mobile apps for both Android and iOS devices, with web apps for other platforms like Nokia and Windows Phones. We were most impressed by the William Hill Android App. LeoVegas Sport’s Web App, which works nicely on all mobile platforms, is worth checking out too.

Where can I find the best PDC World Championship odds?

If you are searching for the best PDC World Championship odds you won’t have to look far. William Hill sponsor the tournament and they have odds available months in advance. For outright betting William Hill are good, but we recommend shopping around for the best odds. As you can see from our PDC World Championship odds comparison table, prices can vary dramatically for the same market depending on the betting site.

Do any betting sites have PDC World Championship live streams?

When does the William Hill PDC World Championship start?

The 2019/20 PDC World Championship is scheduled to start at Alexandra Palace in London on Thursday December 12th, 2019. It runs until New Year’s Day, January 1st, 2020. Betting is available on the PDC World Championship almost as soon as the tournament finishes and Paddy Power are usually one of the first betting sites to form an outright winner market.

Martin Backhouse
More details
Details
Written by: Martin Backhouse
Markets
Our Expert
I have a wealth of iGaming knowledge and experience and I love to explore everything a bookmaker has to offer in order to help punters get the most out of their betting experience.