FA Cup Betting Sites – The Best in the UK

Are you up for the FA Cup? Well, here at My Betting Bonus we definitely are. It is one of our favourite football club competitions and although it may not be as prestigious as it once was, plenty of players still dream of scoring the winning FA Cup Final goal at Wembley. The FA Cup is well worth considering from a punting perspective as upsets are common and value can be easier to find. Finding the best FA Cup Betting Sites is not as simple, but thankfully we are here to help.

On this page, we will not only reveal our top UK FA Cup betting sites, but we will also explain why we rate them so highly. From mobile apps to sign up bonuses and enhanced FA Cup odds, this page contains a treasure trove of information that will hopefully help you to fill your pockets from betting on England’s oldest football cup competition. To learn more, keep on reading!

Compiling our list of the best FA Cup betting sites in the UK was far from easy. The competition was fierce and just like in the FA Cup, there were giant killings aplenty. However, in the end, the cream rose to the top and for us, Betfair is the best FA Cup betting site. They have lots of cool FA Cup promotions and best of all, Betfair has live FA Cup streaming available on both desktop and mobile. Unibet and Paddy Power also have live FA Cup streaming available, as do William Hill!

Betfair consistently comes up with the goods when it comes to sports betting. Initially, it was their exchange that made them famous but these days, their sportsbook is up there too, especially when it comes to betting on the FA Cup. Not only can you bet pre-match and in-play on the FA Cup with Betfair, but you’ll also be able to access live Betfair FA Cup streaming too.

It isn’t just live FA Cup streaming that makes Betfair a leading FA Cup betting site, their promotions are well worthy of a mention too. At the time of writing, they had a superb football free bet offer and FA Cup wagers qualified. If you managed to back a 4/1 same game multi-winner, not only do you get your winnings with Betfair, you’ll get a free bet matching your stake too (up to £25).

This brilliant Betfair offer is open to both new and existing customers from the UK. It only applies to same game multi bets placed on any football match (including FA Cup ties). The minimum odds of your Same Game Multi bet must be 4/1 and it has to win. Only your first Same Game Multi placed between Mon-Sun will count. Your free bet can be used on ANY sport and for more information on T&Cs check the Betfair site.

In years gone by Paddy Power have run some very nice FA Cup promotions. They have had money back specials, FA Cup enhanced odds and they also had FA Cup free bet offers, just like the one they ran last year for the big FA Cup 4th round clash between Man Utd and Arsenal.

This was an offer for new customers only. If you placed a £5 bet on any pre-match market for Arsenal v Man Utd, Paddy Power was giving you a £2 Free Bet to use on every remaining FA Cup match on the Saturday and Sunday. That translated to £26 in Free FA Cup bets in total!! No doubt Paddy Power will have similar FA Cup promotions in the future.

It can often pay to keep your eyes peeled for any available FA Cup specials or betting promotions. If you want to get enhanced FA Cup odds, acca boosts or any other offers, you should find plenty of them with our leading FA Cup betting sites. To give you a taste of what you are likely to come across we have listed a few of the most commonly encountered FA Cup promotions below.

The FA Cup is coming up to its 150th anniversary soon. First played in 1871/72, it is the oldest national football tournament in the world. Amateur and professional teams take part, though the biggest clubs only enter in the 3rd round. The winners qualify for the Europa League and they also take part in the following season’s Charity Shield against the Premier League champions. Arsenal are the most successful FA Cup team in history with 13 wins. They were also the victims of one of the biggest cup upsets in 1992 when a Mickey Thomas fee kick for Wrexham helped to send The Gunners packing in the 3rd round.

Another famous FA Cup upset came in the final in 1988. Liverpool came into the match as red hot favourites against Dave Bassett’s unfashionable Wimbledon side. Wimbledon were in the same division as Liverpool but The Reds were thought to be in a different league. However, Lawrie Sanchez put The Crazy Gang 1-0 up before half time and then Dave Beasant created his own piece of history by saving a John Aldridge penalty. Wimbledon hung on for a 1-0 win and shocked the football world. 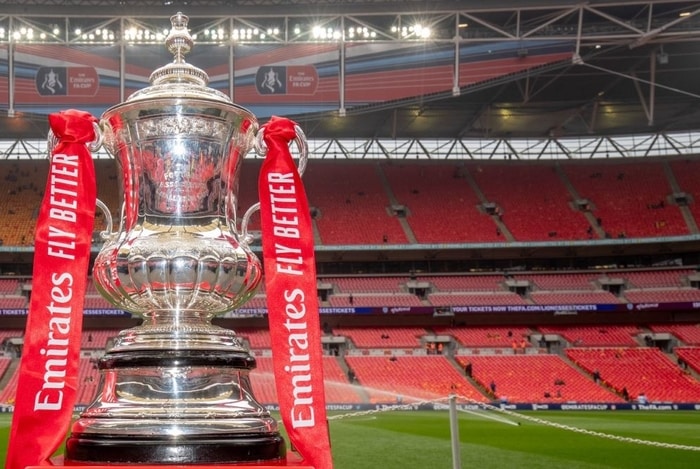 The 2020 FA Cup was well underway at the time of writing. 16 teams were still in the running and all the big guns were still standing. Jurgen Klopp played a youth team in the 4th round replay vs Shrewsbury and Liverpool still went through with a 1-0 win. However, they are sure to rotate again for the later stages as ending a three decade wait to win the Premier League and retaining the Champions League are their number one priorities.

That explains why they are 5/1 and Man City are just 7/4. City have no hope of winning the league so Guardiola can focus on cup competitions. His main aim will be European Glory but he wouldn’t mind lifting the FA Cup too. However, at double figure odds Sheffield Utd could surprise a few people. They look safe in the Premier League already and they are a very well drilled outfit. Chris Wilder would love to lift some silverware and this is a tough side to beat. They face Championship side Reading next. At 1/2 odds for 1-2 places, we think Sheffield Utd are worth backing e/w at 30/1 with Betfair Sportsbook.

So if you are having a bet on the FA Cup don’t just go in blindly. Putting in the necessary research and study can help. Also, our FA Cup betting experts have some advice that might just point you in the direction of a winner or two. For some useful FA Cup betting tips, keep on scrolling!

How To Bet On The FA Cup

If you are going to bet on the FA Cup it is tough to know where to start. The number of different markets for every match is huge and picking the right one is not a simple task. In the next few sections we will look at some important FA Cup markets and explain exactly how they work. If you want to know how to bet on the FA Cup the next few sections are worth paying attention to.

The match betting (1X2) market is where the majority of FA Cup bets are placed. In every FA Cup match there are three possible results; a home win (1), an away win (2) or a draw (X). The match betting market is settled on the result after 90 minutes and extra time and penalties don’t count. Some punters like to combine 1X2 selections in accas. If you are an acca fan, make sure to take advantage of 10Bet’s 3+ Leg acca boost offer.

We all love to see goals galore in football matches and you can make a profit from betting on the various goalscorer markets in the FA Cup. Betting is available on the first or last goalscorer and you can also back a player to score at any time. Some bookies also offer odds on certain players to score 2 or more goals and you can also back players to score a hat trick. For first and last goalscorer bets, in particular, you will usually get decent odds and it can often pay to back penalty and free kick takers.

If you are looking for bets at shorter odds the Totals Markets are worth considering. These markets are where you bet on a certain number of events occurring (or not occurring) during a match. For example, the total goals market is a popular one with FA Cup punters. The bookie nominates the number of goals they think will be scored and you bet on whether you think there will be more (over) or less (under) goals than the amount specified by the bookmakers. Other totals markets include total cards and total corners.

Betting on football in-play is an exciting way to bet. If you know your football and you can judge how a match is unfolding, you can sometimes find some very attractive in-play bets. All of our leading FA Cup betting sites have live betting available, while Betfair and Unibet even have live FA Cup streaming too, so you can bet and watch on your desktop and mobile devices. Find out more about FA Cup live streaming in our next section.

Some purists weren’t happy with the news that live FA Cup streaming would be available with certain bookies for the upcoming season. We weren’t complaining though, as some of our favourite betting sites will be streaming FA Cup action live, including Betfair, William Hill, and Unibet. You just need to sign up and have a positive balance to qualify for live FA Cup streaming and you can watch all the action on both mobile and desktop.

We love to bet on our mobile devices so the quality of FA Cup mobile betting apps is very important to us. One of our favourite mobile apps was designed by SportNation. They don’t have a native Android app but you can bet on their Web App if you use an Android, Windows or Nokia device. Apple device users can use the SportNation iOS app and it works well on iPhones, iPads and iPod Touches. The SportNation App is 21.2MB and requires iOS 10.0 or later. You can download the SportNation iOS App from the App store.

The SportNation mobile and web apps are nicely designed and the colour scheme closely matches the desktop version. SportNation is one of the few FA Cup betting sites that have mobile-only promotions, such as their £20 Free Bet offer if you place a winning ‘Create a Bet’ wager at odds of 4/1 or bigger. Check SportNation for the full T&Cs.

Who has the best FA Cup betting promotions?

Those looking for the best FA Cup betting promotions won’t go too far wrong with Betfair and Paddy Power. However, make sure to keep your options open and look out for FA Cup promotions from other bookies too. You could get a nice boost to your winnings if you find the right promotion.

Who has the best FA Cup odds?

As you can see from our FA Cup odds comparison table, the difference in odds between just two bookies is very noticeable. Man Utd, for example, are just 10/1 with Betfair to win the FA Cup yet they can be backed at 16/1 with Unibet! This neatly illustrates just how crucial it is to shop around for the best FA Cup odds, no matter what market you are betting on!

Martin Backhouse
More details
Details
Written by: Martin Backhouse
Markets
Our Expert
I have a wealth of iGaming knowledge and experience and I love to explore everything a bookmaker has to offer in order to help punters get the most out of their betting experience.